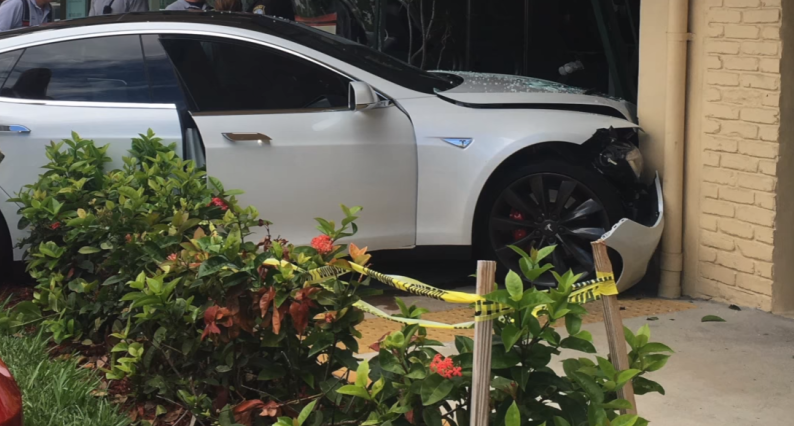 A Tesla Model S recently crashed into the door of a Lighthouse Point gym as it was pulling into a parking spot located in front of the fitness facility. According to the driver of the vehicle, the accident was allegedly caused when the Tesla suddenly accelerated autonomously, causing the vehicle to drive over the parking spot curb stone and into the front entrance of the gym.

Fortunately, nobody was injured during the accident, but could have been far more devastating, as a patron of the gym had walked through the door only seconds before the accident occurred.

Tesla released a statement claiming that their review of the vehicle logs show that the accelerator pedal was physically pressed down during the accident, which the driver of the vehicle disputes.

A strikingly similar accident occurred back in June, when the driver of a Tesla Model X attempted to park the vehicle and it apparently accelerated without warning, causing the vehicle to crash into an adjacent building. The driver in that accident also claimed that Tesla was quick to label the accident as driver error based on vehicle logs, despite the fact that no representatives came to physically inspect the vehicle following the incident.

While accidents caused by drivers mistaking the accelerator for the brake pedal are relatively common (approx. 16,000 annually), these accidents, and reports of others like it, are different in that drivers claim that the vehicles accelerated on their own. As we have discussed in the past, the advent of more technologically advanced vehicles, and even self-driving vehicles, will bring about a whole new range of electronic and computer related defects that will cause accidents. The convenience and lure of this technology is clear, however, the potential collisions and injuries that can result from possible defects bring about valid concerns over the just how ready we are for self-driving cars.

For discussion on this topic or any other, feel free to contact the Schulman Law Group at (954) 349-3300 or at info@www.schulaw.com.