Teenager Killed in North Miami After Being Struck by Car 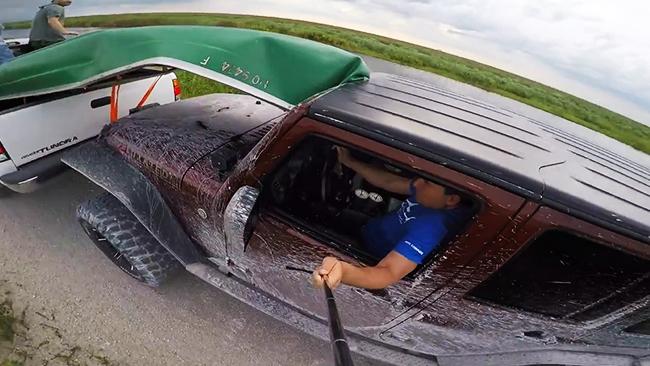 An unfortunate driver from Oakland, Florida, unintentionally filmed his own motor vehicle accident while using a Go-Pro camera attached to a selfie-stick as he drove behind a friend’s vehicle on a dirt road through the swamps of central Florida.

In the footage, which has since gone viral on YouTube, the driver can be seen looking into his camera while driving, noticeably taking his eyes completely off the road, and more importantly, the vehicle directly in front of him.

As viewers can see, as the driver’s Jeep Wrangler quickly approaches his friend’s pickup truck, he realizes his mistake at the last moment, but has no time to avoid the collision. In a dangerous twist, the pickup truck was carrying a canoe that was hanging several feet off of the truck bed. The canoe frighteningly pierces the Jeep’s windshield, but thankfully nobody was injured.

Images of the aftermath show that the glass of the windshield is completely smashed while the portion of the roof that was stuck has a sizable dent.

This video provides a humorous look at a trend that often has much more dangerous consequences. Driving and texting, or using one’s phone in any way while operating a vehicle is extremely distracting. As the video proves, even when driving on a dirt road in the middle of nowhere, taking your eyes off the road for even a moment can have devastating results.

For further discussion on this topic or any other potential issues concerning auto accidents and related injuries, feel free to contact The Schulman Law Group at (954) 349-3300 or at info@www.schulaw.com